THE MONSTER DEMANDS A MATE...

One of my favorite horror films (or in any genre for that matter) is "The Bride of Frankenstein" by James Whale. It is the perfect combination of horror, camp, comedy and style. It was extremely edgy for the time period, taking jabs at religion and alluding to homosexuality. Being the sequel to the hugely successful "Frankenstein", Whale had more freedom to put his stamp on the film. This style elevated "Bride" into a much more charming film (although less frightening than it's predecessor). A scene that has always tattooed it's image on my brain is Doctor Pretorius sitting in a crypt, having wine by candlelight with a pile of female bones which he exhumed. Whale, like Edward Gorey and Charles Addams, had the keen skill of knowing the exact measurements when it came to combining humor with morbidity. 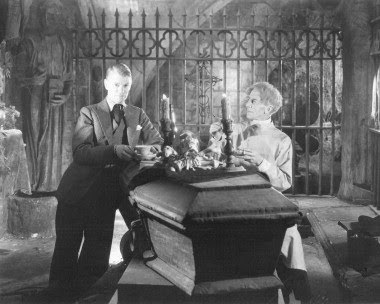 Another reason why "Bride" has such an impact on me (again having to do with Whale's unique style) is the design for the Monster's Mate. The look for the bride came from James Whale and Ernest Thesiger, inspired by Queen Nefertiti of Egypt and Maria of Metropolis. Only a flaming homosexual would think to model a female monster after a Queen. But it is this exact vision that gave birth to the horror icon of beauty and worship that she is today. Those are big shoes to fill.

Over the past week, I've been working on the design for the Monster's Mate for my illustrated version of Frankenstein. Even though she doesn't play near the role in the book that she does in Whale's film, I think it is important that her image is as developed as any other character in the book. 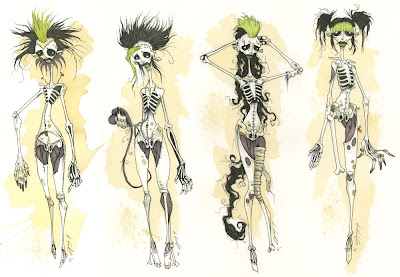 I drew upon my own interests and elements of my modern world to piece together the character. Most of these "raw materials" came from my love for styles found in horror punk, death rock and goth culture. I don't see myself a part of any genre, but I'm fascinated by the spectacle of these fashions. I wanted my bride to not only capture horror and sympathy but also sexuality. Without making it evident, I allude to fetishism with imagery mimicking tights, corsets and platform heels. The result...

...a creation that is both horrifying and appealing. A tragic victim on the verge of the same misfortune delivered to the Monster.

It feels good to be getting back into this project. I am almost done wrapping up sketches for volumes 2 and 3, which means I will be moving onto illustrating pages. I will be contributing more to this blog, posting the page of the week and updating you on any and all progress. I look forward to resurrecting this community again.