AND NOW WE HEAR FROM THE PUBLIC...

This may in fact be my final Frankenstein blog. The work has long been assembled and shipped off for mass production. Now, it is time to sit back and await the release in August. In my head, I imagine unsuspecting mothers discovering the book nestled somewhere between WHERE THE WILD THINGS ARE and OLIVIA. Their faces recoil in horror to the grotesque images as their children run out of the store screaming. What has been seen, cannot be unseen. Historians eagerly flip through the pages with scrutinizing fingers, appalled and perplexed by the juxtaposition of modern punk icons and Victorian authenticity. Somewhere in a comic shop, the book awaits discovery. And then, there are those, the misfit minds for whom this book was created for. They will discover the book and instantly develop a kindred bond as they are transported to another dimension. This will be their bible. It will remain by their side with loose spine and filthy pages, shared in school hallways and peeped through at midnight under private sheets. "Fans will return to these pages obsessively; readers encountering the story for the first time may find Grimly’s images rise to view whenever they think of it."

These bits of words were discovered this morning when I awoke to find the first review for Frankenstein was released by Publisher's Weekly. They wrote...

"Grimly’s fans have been awaiting this reworking of Shelley’s 1818 classic for four years, and they will rejoice in the end result. Spidery ink lines and a palette of jaundiced yellows and faded sepias plumb the darkness of the writer’s imaginings. Frankenstein’s bone-embellished military jacket and pop-star shock of hair turn him into a sort of anachronistic punk scientist, but other elements of the work are more circumspect. Crabbed, tense portraits of Frankenstein’s friends and family combine historical detail with theatrical emotion. The images of the dissections that lead to the monster’s creation dwell on flesh and bone, yet show, for Grimly, a certain restraint. Even more notable is Grimly’s refusal to capitalize on the horror of the iconic scenes for which the movie versions of the story are remembered. The monster’s crimes are shown mostly in b&w thumbnails, as if Grimly were hastening through them to probe more carefully the monster’s self-loathing and Frankenstein’s ruin. Fans will return to these pages obsessively; readers encountering the story for the first time may find Grimly’s images rise to view whenever they think of it."

What a radiant opinion to start with. I look forward for more to come.

What an exciting day this Wednesday has started out to be, with a visit from the UPS man at the door. My breakfast (consisting of eggs, sausage, a slice of cinnamon toast and a cup of coffee), was abruptly interrupted by fierce knocks at the front door. As I went to answer, a UPS truck scurried off like some child guilty of ding-dong ditch. There at my feet lay a small special package from Harper Collins Publishing. I brought it into the dinning room where I was having breakfast with my wife. She asked if I was expecting anything. As I slit the envelope open, I quickly realized what i was in store for. I had received the BLAD for Frankenstein. With Karen Elson spinning on vinyl, my wife and I flipped through this first quality production of my new upcoming book. 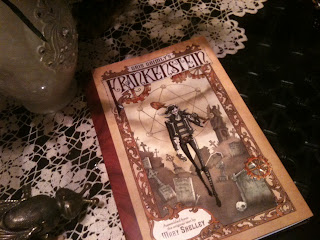 What is a blad? A blad is a booklet consisting of a few sample pages or chapters of a book with a proof of the front and back covers or book jacket. It serves as a preview of the book for promotional use, reviewers, and advance sales. Blad stands for Book (or, Basic) Layout And Design. Dictionary.com suggests that the word comes from bl(urb) + ad. It is sometimes written in all caps as BLAD. A blad is similar to a galley although the galley is typically a low-cost version of the entire publication sent out to book reviewers, rather than just a sample. 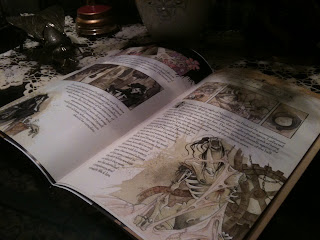 With a street date of August 2013, we are getting closer and closer to the day when this abomination (the result of a four year labor excursion) will become available for all to enjoy.
Posted by Gris Grimly at 10:34 AM 4 comments: